In 1976, it was announced that women would be able to serve in the United States Air Force, claiming  that the women who applied would be the first to fly military aircraft. That was untrue. Women of the WASP program had not yet been recognized for their service and contributions during World War II, and they wanted people to know that they truly were the first women military pilots.

“The Women Airforce Service Pilots courageously answered their country’s call in a time of need while blazing a trail for the brave women who have given and continue to give so much in service to this nation since. Every American should be grateful for their service, and I am honored to sign this bill to finally give them some of the hard-earned recognition they deserve." -President Obama

On November 23, 1977, President Carter signed a bill into law stating that the WASPs had officially served as active duty in the Armed Forces, granting them veteran status. In 1979, the WASPs were also granted official discharges from the Department of the Air Force. In 2010, they earned Congressional Gold Medals, the highest civilian honor, presented by Congress. The Women Airforce Service Pilots’ legacy is shown in over 50,000 women in the Air Force today. Their hard work has paid off in leading the way for young women to fly for their country. 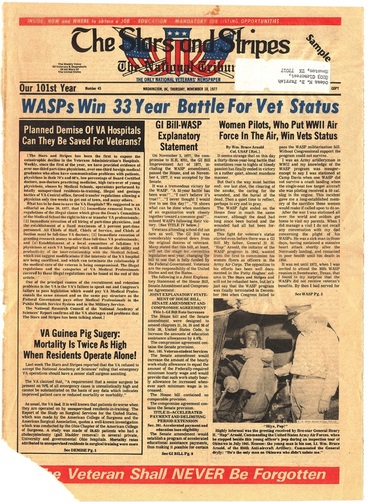 Front page of The Stars and Stripes: The National Tribune,
November 10, 1977, Courtesy of Wings Across America 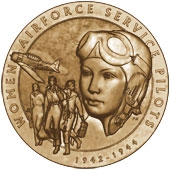 Courtesy of the U.S. Mint